All about John Horniman, his Tea Company and how the Children’s Trust that bears his name came into being. 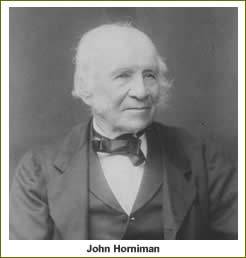 John Horniman was probably the first tea merchant to ensure that this product was honest, clean and pure. This was almost certainly influenced by his Quaker upbringing and the testimonies he was familiar with and clearly practised which underpin this Religious Society of Friends known as Quakers.

Quakers believe that religion is about the whole of life which should be led as simply as possible with honesty and integrity as essential ingredients to daily living. During the 19th century many Quaker industries became successful and profitable: they were known for being entirely honest in their business practices and in their employment procedures. The outcome was that many of these Quaker business men, not wanting to profit themselves by their newly found affluence, established trusts and funds from which we all benefit today. Joseph Rowntree Trusts are some of the most well known and the John Horniman’s Children’s Trust came into being due to the tea merchant’s business success and on retirement the philanthropic practices he followed. 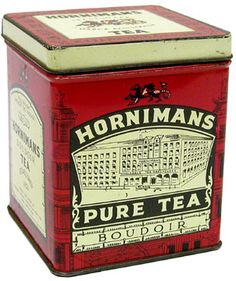 John was born in Reading on 4th December, 1803 to Thomas and Hannah Horniman who had joined the Religious Society of Friends (Quakers) shortly after they were married. So it was that John and his brother Robert were educated at Ackworth, the Quaker school in Yorkshire.

Following their schooling John and Robert set up grocers businesses but by 1826 John Horniman had founded the tea trading and blending business ‘Horniman’s Tea Company’ in Newport, Isle of Wight. In 1852 he moved the company to London to be closer to the bonded warehouses of London Docks, then the biggest tea trading port in the world.

At the time that John Horniman established the business, tea was only sold as loose leaf, enabling unscrupulous tea traders to add other items to the product, dust and hedge clippings being some of the additives. John Horniman, following the Quaker testimony of integrity, wanted to demonstrate the honesty of his company and so found a mechanical method of filling tea packets which could then be sealed. A further testimony to the quality of Horniman’s tea came following a series of articles in The Lancet in the 1850’s about the adulteration of food. The editor Thomas Wakeley arranged for food samples to be tested for purity and Horniman’s tea was ‘extremely praised as passing the tests in triumphant fashion’. The business flourished following this article, which subsequently led to the Foods and Drugs Act of 1860. John Horniman could be seen riding to his London dockside warehouse in full Quaker attire mounted on his black horse. By the end of the century Horniman was the largest tea trading business in the world. 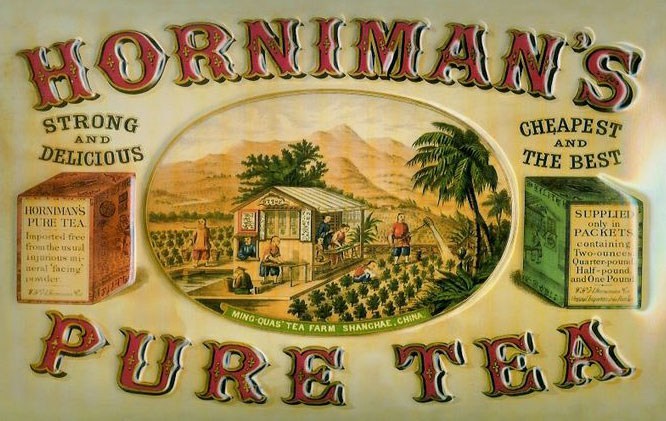 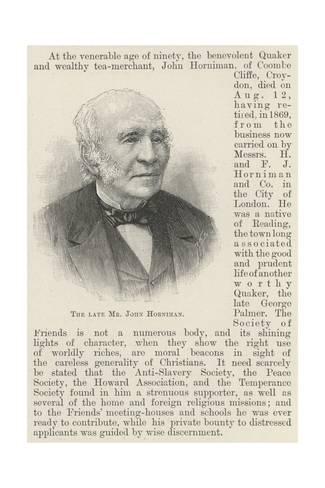 In retirement John Horniman devoted  his energies and accumulated fortune to philanthropic work. Amongst many other organisations that received his active support was the Anti-Slavery Society and the Howard League for Penal Reform, both had significant Quaker membership and allegiance. In 1899 he settled money on Trustees to buy or build a convalescent home suitable for disadvantaged children in need of convalescence. This home opened in 1892, a year before John Horniman died at his home in Croydon, Coombe Hill House. He was almost 90 and had been married to Ann (nee Smith) for over 67 years.

The convalescent home closed in 1941 and after the Second World War it was leased to the Invalid Children’s Aid Association, which in 1986 became Invalid Children’s Aid Nationwide (ICAN) and eventually converted into a school for children with speech and language problems. The school closed in 2003 and the building was sold. The money from the sale has been invested to generate an income, and Trustees have revised the deeds of the  charity to carry forward the vision of John Horniman by making grants to organisations to assist with the relief of sickness and the advancement of the education of children who are sick, convalescent or have learning disabilities. 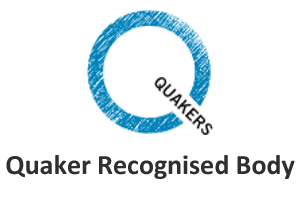 The Trustees are all members of the Religious Society of Friends (Quakers) in Great Britain.

Take a look at the variety of projects we have supported

Projects we have Supported

How we have helped organisations further our aims

Organisations may apply for grants to meet our aims

Guidelines for applications, citeria for grants and our Funding Application form